Sori Brewing CEO Pyry has a holiday tradition to go celebrate New Year in different countries. This time it was time for a road trip in Spain, from East Coast to Andalucia in South and again up to the capital, Madrid. During this great trip he had time to meet some great people that are part of this wine country’s craft beer revolution.

Since Spanish beer culture is experiencing the same problem as in many countries where craft beer is just on a growing stage, the scene is very diverse and it’s impossible to tell which are the one hit wonders and what breweries are in it to win it. Here are some thoughts Pyry has on Spanish growing craft beer movement. Javier and Pyry. Behind is the painting of a lion tamer that has inspired the name of Javis beer shop in Nerja, La domadora y el león.

First I met Javier Leon and his wife in his beer store La domadora y el León in Nerja, which is a sunny village in Andalucia. We had some good beer talks and I got to taste their upcoming brewery’s La Axarca Tropical Pale Ale (made in SON brewery), which was very refresing and balanced Ale. His beer store is a nice place to stop by for Spanish beers, but also for Belgian and American ones.

Since my timing was challenging (Christmas/New Year), it wasn’t that easy to find places that were open. Luckily, I had a possibility to visit Cervezorama beer shop in Madrid, which also had a great selection of Spanish craft brews. I also got bottle from their brewery project’s Yria-Guinea pigs! new Belgian style Strong Ale, Fraycui. This brewery was one of the first ones I stumbled upon when I was searching for Spanish craft beer. 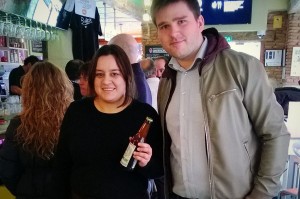 Pilar (with Investor IPA in her hand) and Pyry in La Tapa, Madrid.

Next up was a craft beer restaurant in Madrid, La Tape, which was recommended to me by a friend. I got to taste some fresh stuff from their taps and got introduced to Pilar Sanchez who is in charge of their craft beer selection, which was pretty great! Nice atmosphere and a nice neighbourhood (just a block away from Cervezorama).

[pullquote align=”right”]Maybe a Finnish/Spanish collaboration brew coming up?[/pullquote]I also got some of our own brews, Investor IPA, with me and left some bottles of it to fellow brewers and craft beer people. I just hope I had more time to meet more people and breweries, but this just confirms that we have to visit another time soon. Maybe a Finnish/Spanish collaboration brew coming up?

Some craft breweries in Spain love to experiment with styles that are usually very strong in ABV. One of these styles is Imperial Stout, wich is one of the greatest beer styles in my opinion. Problem with this style is that it is very strong in taste and overall, and according to Javier, Spanish people are still very much into lighter styles that fit in the warm Spanish climate. That’s why it seems that Spanish craft breweries have a lot of Pale Ales, Red Ales and other lighter Ales, which is pretty great in my opinion! If I understood correctly, stronger styles come more popular when going Northern Spain and Barcelona already has a pretty vivid craft beer scene.

Good thing Europe has very much thirsty craft beer fans graving for new stuff, it wouldn’t be that hard to get great beer sold. Logistically and marketing-wise it takes some arrangements and barriers to overcome, but I predict that some day we’ll get these best Spanish brews on glass here in Nordics, too.

[pullquote]We most definitely will visit Spain for craft beer again.[/pullquote]For a beer head, Spain is a great country to visit. Enthusiast brewers that know their stuff and has some exciting brews already. Whether you visit South or North, you’ll find new craft breweries. If you have time and want to visit as many as possible, go to Barcelona and other Northern big cities that have many new breweries craft beer boom. South is developing slower, but because of the nice and warm climate, it’s always fun to visit Andalucia. The brewery scene is evolving fast and it’s fun to watch it grow. We most definetly will visit Spain for craft beer again.