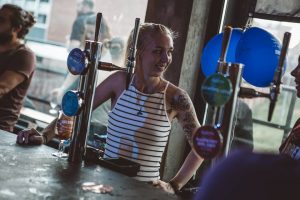 This was our second year at London Craft Beer Festival and oh boy it was fun! A completely new audience for us but being our second year, people start to recognize Sori Brewing already. It’s great to share the venue with amazing breweries like Omnipollo, To øl, Lervig, Siren, Kernel, Partizan, Wiper and True, Buxton to name a few. London festival is always a good place to meet old friends and to make new ones. Also, of course to showcase your brews.

The atmosphere on all sessions was groovy and relaxed, a very different beer geek festival. Not so serious, just the way we like it. Groovy reggae and ska tunes kept us dancing two days straight. People probably thought we lost it now or ‘damn those Estonians / Finns / Something are weird’. Cool thing was that sessions were sold out so this place was packed. It made our day to get such good feedback for our beers. Many said that they were so positively surprised that we became their instant favorite. That was our goal all along.

P.S. See above the aftermovie, you can see some happy Sori people from 0:23. 😉

We brought some of our new stuff to London, but also featured our loved classics. Here was our complete beer list for the festival:

You can read more about Sori beers here.

Next in the U.K. it’s the Bristol Craft Beer Festival for us. Meet you there? Website and tickets.