How to put ‘Finland’ in the Craft Beer?

How to put ‘Finland’ in the Craft Beer? Finns have a troublesome relationship with beer as we will explain more specific later. Still we think there’s some essence of Finland we can put in our beers, even though, our national beer style is lager and maybe sahti as a historic curiosity. Our beer has a traveling Finn philosophy: we love to learn from other cultures, imitate and compliment. And of course, we have great nature that gives us quality ingredients for great brews, from malts to hops, all the way to spicing it up.

Even though we are using pure Finnish ingredients in our beers as much as we can, that is not the essence what makes a great Finnish beer. As we said, it is the philosophy behind it. We are a humble, both feet on the ground. We like rules and obey them with no questions asked. However, today’s Finns are curious and willing to try new stuff. Some of us are even bold enough to have big dreams and build success stories like Nokia, Rovio or Supercell.

We are not claiming we want to be a next multibillion company but we certainly want our craft beer to be the next big thing. We put in hard work, keep our feet on the ground and reach for the skies. Keeping it cool, fun and we never take ourselves too seriously. You can laugh at us – we laugh with you. A constant dialog with other breweries and beer enthusiasts will teach us to understand modern beer lovers’ enthusiasm and step it up a notch. We will show when your nation doesn’t really support you, it shouldn’t put you down. It should make you want to prove yourself.

We come from the land of midnight sun, land of northern lights and other nature awesomeness. We are amazed by our nature and that’s why we put that wow experience in our craft beer and share all that with you. Thus, beer is one of the oldest and most natural products in the world.

Finland is not really a beer country. Beer is seen as bulky lager that is used only for getting buzzed. When we order beer, we say ‘beer’ and it’s rare that we would define what kind of beer we would like to drink. That’s the main reason we have easy-to-drink lagers and they are brewed to maximum alcohol volume you can sell on grocery store (4,7% alc) – and usually they are extended with cheap starch (which can come from potato). Bulky lager brewery Olvi just stated that you can’t really sell anything but lager here – that is true. Lager is actually a synonym for ‘normal beer’ for people; everything else is ‘weird’ or ‘curiosity’. The reason really isn’t the people here, they would try new things but breweries don’t have courage or ambition to develop Finnish beer culture. Beer enthusiasts here put it well; bulky lager breweries in Finland are more of a chemical industry than breweries in Finland.

The reality is that this is the past and the present is bubbling underneath where these lager breweries can’t see it. Night clubs are losing customers, bulky pubs are dying and new beer restaurants are popping up everywhere – and draw crowds. After Finnish prohibition, there are probably more craft breweries than ever (even though we don’t have that much). People here are slowly getting what beer can be – not just lager with no taste. We are taught that the beer standard is a bitter tasting lager and nobody should drink it for any other reason than to get drunk, because of the taste. Now we have more information available, we have better income and we have more time for ourselves to have gastronomic experiences. We are not wine people (even though state monopoly alcohol store has pretty good selection from all around the world), that’s maybe a bit fancy and expensive for Finnish humble nature. We are honest, average people and we savor small moments. We enjoy our midnight sun, our families, cottage by the forest lake, northern lights in Lapland and of course our strong welfare system. We may settle for little things, but we savor every moment of it. 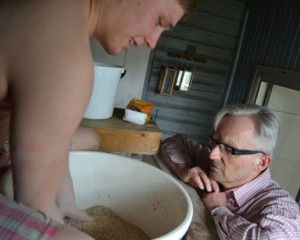 Finland is a funny country. We have a weird relationship with alcohol – at the same time as we have the longest lived traditions from brewing. Finnish government or the large breweries do not appreciate that. We should. Sahti is one of the oldest beer styles that have remained from ancient times and that tradition is still strong here in Finland. On the other hand, our system has good things, too (despite the fact it’s wrong in all things related to alcohol); because our education is free, we have an opportunity to even become professional brewers or anything like that if we want to – and it’s free. That’s why we have and university educated micro biologist and two soon to be M.Sc.’s in economy and business. We have good access to all information and it’s easy to expand your knowledge; that’s one of the reasons why many Finns see people like Snowden and Assagne as heroes rather than criminals.

We have a complicated relationship with alcohol. State sees that there are a lot of people with alcohol problems, mostly with lower education and low household income. Our legislation and politicians treat us like everyone has a problem, or at least everyone should pay for it and suffer from it. That’s why we have alcohol monopoly where only state owned monopoly can sell beer over 4,7% alc. volume. As many beer lovers know that leaves quite a beer range out from grocery stores. Okay, we get that they want to try monopoly system as a cure for alcoholics. Yeah, we all know that’s not working. The state owned liquor stores are only found in dense lived areas like city centers or maybe in motor markets. They are not open very late and they are certainly not open on Sundays. You can’t get beer anywhere before 10 am, not even in grocery stores. State owned Alko doesn’t promote beer, they don’t keep large stocks and they have only around 200 varieties – and most of those stores have way less (when stores like Total Wine and More has 2500 varieties). Same time we have state owned alcohol factory that produces hard liquors. AND, our system has made alcohol +75% pricier  than in other EU countries (avg). It is pretty hard for breweries to get in to this system since there are not that much shelf space, buy-in system is very bureaucratic and your beer will cost so much that people really don’t want to buy it. That is the reason why elsewhere they would call us a craft brewery – here the official expression is small brewery. That’s probably because you remain small, since there’s no ground where you can grow in. That’s why we will be a Finnish brewery in Estonia.

Now state is even tightening alcohol marketing legislation, as if it wasn’t enough. Now it will be illegal to market alcohol in social media in Finland. Yeah, we know the humor in that – social media is not country specific. But we think that means you can’t target it to Finns or do it in Finnish. And we have a feeling this stuff can get even crazier. You now probably don’t free musically followers no survey or offers wonder why we are moving to Estonia to start our brewery.