We had a great opportunity to learn more about Finnish beer history and master brewing traditional Finnish Sahti. Sahti recipes vary quite a bit in different parts of Finland and this recipe we learned is from the Western part of Finland, Pirkanmaa region. Main differences come from techniques used and from the usage of hops and juniper. Some say Eastern/Southern Finland sahti brewers use more juniper, but we came in to that conclusion that every family recipe has their own little twist. Also, we had to use some more modern equipment, because this time we didn’t have an access to things like straws (for filtering, instead of using a plastic mesh). For you guys who want to do it how it was made back then, here’s a brief description how to make sahti more traditional way.

Our mentor here is Klaus af Ursin, who is also a management lecturer in University of Tampere. Klaus has learned this tradition from a former school headmaster Kalaja, who had learned this from his ancestors. The origin of this recipe is tracked back to Ikaalinen, Finland. We brew this batch in Kangasala, Finland in Klaus’ historical villa. This experience felt and tasted like a time travel. Here’s a brief journey through our day. 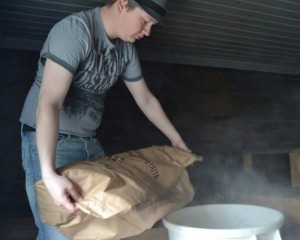 Beginning with mixing 25kg of Finnish sahti-malts (which is pretty much 90% pilsner malt, 5% caramel and 5% enzyme malt). A very crucial ingredient  are malts here, so we had two kilos of traditional rye malts added. Before mashing, the malts have to be moisturized. Not wet, just moist to get them starchy and sweetened. This is repeated three times with an hour between. After preparing malts for six hours, we can start the brewing process.

Usually sahti is made in a sauna. We take a 100 liter water boiling pot from sauna, clean it up and heat water for the wort. (Please note that we don’t use any chemicals. Not even for disinfecting, just use boiling water.) Then we pour in the malts and start cooking. This is trickiest part, because malts get easily burned and that will leave a bad taste. Some brewers boil a little juniper branches in water to add some extra flavor.

After boiling the mash, we make a thick mattress of malt in long wooden bowl called kuurna. We put in wooden sticks on the halfway of this bowl to make sure that there’s room for wort to flow underneath. Before putting the filter mesh, we cut pieces from some fresh juniper to add taste. The traditional way is that kuurna is a wooden one and instead of filter mesh you use nature straws.

When we have done mashing, we open the plug from the bottom of kuurna and pour the wort in buckets for hopping. Some brewers don’t use hops at all and sahti is usually very malty and sweet drink, but we wanted to make this a bit easier to drink and balance the maltiness with Spalter hops.

After we have done hopping, we move the wort to a bigger vessel to cool down a bit. Then we take traditional Finnish baker’s yeast and make a little starter for it and pour it in to the wort. You leave it to ferment for overnight, maybe 10-14 hours (some leave it for longer time and could use a little less yeast).

It’s morning and the moment of truth. You may or may not have contamination in your wort, you have to smell the wort and when it smells fresh and malty, it’s the real stuff. Usually this goes just fine and boiled water kills all the germs that could contaminate the sahti, but when you are using traditional techniques and no chemicals, you have to be more careful.

Fermented sahti is now ready and we take it (usually in to a cellar) for a secondary fermentation in the cold, usually just above zero degrees Celsius (+1 to +5 °C). Some think it is drinkable after few days, but we let it stand for a little over a week. The most important thing is that you can’t really store sahti long times, it’s usually drinkable only for a couple of weeks. That also makes it so special, that you can’t bottle or keg it, it is a product you have to serve fresh.

What makes Finnish sahti so special and why it is hard to imitate?

Some breweries have made some own versions of sahti, but these usually have nothing to do with real sahti. The most crucial things in brewing sahti is that it has to have the right kind of yeast, it has juniper (some say that there are differences what kind of juniper you can really use) and the technique used is usually pretty hard to scale up, so usually it’s harder to make bigger batches of sahti. In Finland there are commercial sahti brewers that have equipment to make 2,5hl sahti at a time, but it’s up to you to decide should it be brewed in sauna handmade or can it be scaled to such size. 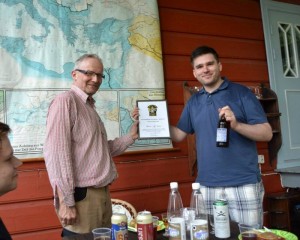 The taste of sahti is very unique, but it has some similarities to ultimate malty beers. Usually they have incredibly lot of banana in the taste, but it can also have more juniper, depends on how much of it has been used. The main taste comes from the Finnish yeast used and that’s why it’s hard to imitate with any other yeast. Sahti is served very cold, below +5°C and alcohol volume is rarely measured, but usually it’s pretty strong, somewhere 6-10% alc. For these reasons, Sahti-making is mostly a beer tradition that is transmitted from older generations and it’s rather hard to scale up a commercial version of it. For these reasons, we have huge respect for this ancient craft beer.