In case you didn’t know, Finland is one of the strictest countries in Western world with its alcohol legislation. Finnish alcohol tax is the highest in the European Union and craft beer growth is slower than in many other European countries. Finnish alcohol legislation is supervised by government agency called Valvira and its regional sub-agencies, AVI. Because Finland is actually banning the most of social media marketing from the beginning of year 2015, we wanted to give you a sneak peek of this system.

Here’s the Top 10 oddities we picked from Finnish alcohol legislation:

10. Banned Speedway Stout – and no drinking in remote places

You can’t portray a journey, if you are going there by car. So, Finnish ads are pretty much picturing people drinking at their homes? Alcohol brand can’t sponsor any motorsports or one can’t name a boat by an alcohol beverage.

Did you know, that according to Valvira, the famous top rated beer Alesmith Speedway Stout would be banned in Finland? Just because the bottle has racing flags and the word “speedway”?

You can’t use words referring to “strong” in your label or marketing. Spirit named Woima (Power) was banned and Sandels beer slogan “General Sandels was stronger than a bear” was considered as illegal marketing. They consider it emphasizes the positive aspects of alcohol. How’s that a positive aspect – and who made that call?

8. No athletes in marketing, even retired ones

Valvira states you should avoid using any sports or athletes when marketing beer or any other alcohol beverages. For example, the retired Finnish four time ski jumping Olympic gold medalist, Matti Nykänen’s, slogan “It’s a 50/60 chance” was banned from a long drink label. Valvira stated that it was common knowledge to know, that this athlete has had an alcohol problem at some point of his life. So sorry, if you are an athlete and have had some problems in your life, you can’t be in a beverage business.

Professional bloggers (who get any benefit from the producer) are now banned to blog about alcohol beverages. If you are a restaurant owner (or have any effect in buying decisions in the restaurant) you can’t let people know that you liked some beer, even on your personal Facebook page. In addition, you have to delete all comments saying “this beer is a good one” from restaurant or brewery Facebook page. So, now hiring 24/7 social media moderators? True story: Valvira was in contact with Facebook and asked if they could ban the use of Like-button in Finland, so people can’t like alcohol related posts.

Finnish big beer label, Lapin Kulta, stated that their beer is “coming from the fresh waters of Lapland mountain streams”. According to the Valvira, the fact that the water came from a river downstream, it wasn’t a mountain stream anymore. They had to change their slogan to “fresh like a mountain stream in Lapland” and Valvira was happy again. Think about it. Government people actually had to look some maps to figure this out?

Finland has strong roots in feminism and women rights. That means, you have to be extra careful if you try to portray women in marketing. Valvira banned a beer ad, which had a woman with pointy metal cone breasts saying “many things are better soft”, referring to the beer taste – and breasts. Ask Germans how they feel about mixing beer & boobs in their world famous Oktoberfest? Yeah, it might be bad taste, but hey c’mon? To be honest, we can’t figure any marketing involving women, that wouldn’t label you as a sexist a**hole . That’s why we use only serious bearded men (with or without boobs).

3. Make sure your Santa Claus has a beard and a beer belly!

It is forbidden in Finland to portray Santa Claus (or elves) in a seasonal Christmas beer label, “if their body structure is child-like”. Also, all animal mascots (including Rudolph the Reindeer) are banned, since they are considered to attract children into drinking beer. How about that red nose? 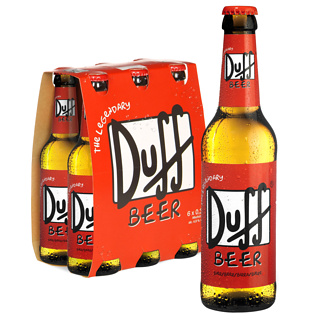 2. Duff Beer from Simpsons is banned

They banned the Duff Beer label in Finland, because Valvira consider Simpsons (the show is not dubbed or anything in Finland, by the way) to be a children show. Again, a beer that would attract children into drinking. D’oh! Duff-Man is BAD. Instead, they consider a Finnish cartoon Viivi & Wagner to be okay, because it’s obvious to Valvira, that this cartoon is for adults. By the way, in this comic men are pigs (literally).

Finally the craziest thing (like the previous nine weren’t enough). A whisky distillery is not allowed to serve their products in a closed, invite only opening ceremony. So, even though you had investors, restaurant owners or even your parents there, you can’t let them taste the whiskey you produce for living. Valvira considers this as an illegal spirit promotion. Very sane argument, isn’t it?

So, how they control all these?

The fact is that Valvira actually have stated that they don’t have any time to monitor producers, restaurant owners and such to obey these laws. They say that they wait for the citizens to be aware and let Valvira know if there’s Ron Jeremy or retired athlete in a bottle (sad thing is, that people really do that). Also, their sub-agencies can interpret all their rules by their own and this can cause that they are not in line with their original legislation. You still wonder why Sori Brewing had to move from Finland?

Apparently Finns can’t think on their own, so glad we have Valvira and other agencies protect us from ourselves. And yes, all of these are real cases and even not that old ones (can be found from their instructions published this month).

Welcome to Finland, the wonderland of , and safety!

All these oddities comes from this document: Valvira Instructions to Alcohol Marketing (PDF, in Finnish)