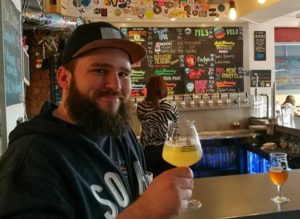 We got to start our trip by getting familiar with Norwegian alcohol laws, which are pretty much as crazy as in Finland. In this case, BrewDog Grünerløkka bar is obviously not allowed to be called with brewery name, since that would make all literate people alcoholics. Instead, it’s called BD57. Sadly something very similar that could happen in Finland.

Well, glad they still invited us over for a Sori Tap Takeover.  On tap they had: Passion Punch, Lacuna, Delirious, Hardly Working, Coffee Gorilla, Investor IPA, Madonna of Sori and Dog Sled Fuel. 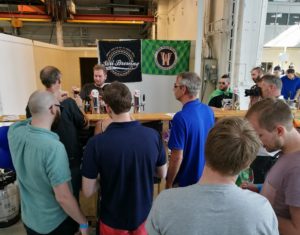 Thanking our friends from Haandbryggeriet for the invite to Haand Olfestival 2017, it was a blast. The event took place at the brewery in beautiful Drammen, which is also home for the oldest Norwegian brewery in operation, Aass (yes, we smiled as well). We were thrilled to see how amazing response we got. After the organizer, we gained poured the most beer at the festival, which makes us humbled. Happy to pour alongside with many breweries we look up to and meet plenty of new faces.

Our relationship with Haandbryggeriet is actually quite a coincidence, as the recipe for Sori ‘Coffee Gorilla’ was many years ago inspired by Haandbryggeriet ‘Costa Rica’ Porter. So, in a way this was a personal achievement for us.

We were battling in a Nordic food pairing competition against Haandbryggeriet at Håndverkerstuene in Oslo. Both teams paired three courses by talented Arnar Jakob Guðmundsson with three beers from both breweries.

The result was actually a historical tie, as our dessert pairing split people. Because of this, we went to thrilling recount of all votes and in all votes (almost 300 votes) our Norwegian brothers and sisters took the win at their home arena. We consider that is pretty well in front of their fan audience. Read here details written by Camilla Grøneng (in Norwegian).

If you got interested in Sori Brewing beers in Norway, now they are available. We have currently eight beers available in Vinmonopolet, Norwegian alcohol monopoly store.

Also, if you know a good bar or retailer, our importer is happy to supply them. We are represented in Norway by Naturlig Vin: Falchenberg & Nærlie (Tel. 41434801, E-mail: edward@naturligvin.no).