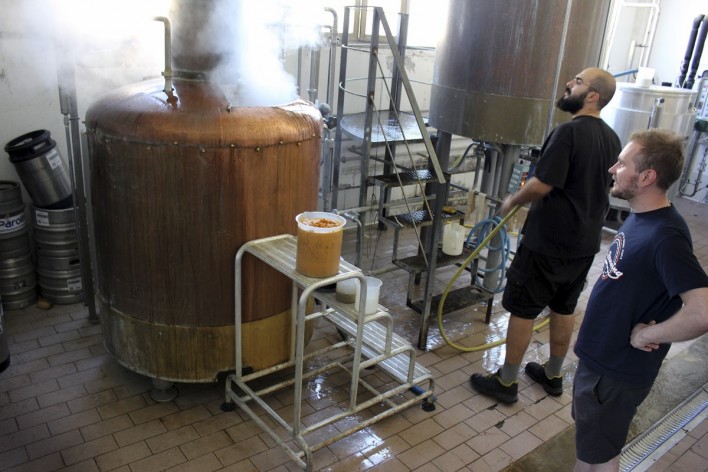 What you get when you collab with people as crazy as you are? Awesomeness. This time we were collaborating with our friends in Birrificio Del Ducato at their sour brewery in Roncole Verdi Di Busseto, near Parma (also home for Giuseppe Verdi). Italian craft beer is booming like crazy, they have already over 900 craft breweries in whole Italy.

We were brewing with Danilo, who we originally met here in Tallinn for a beer festival. Things clicked and we ended up doing the most interesting brew one can imagine. Bringing together the sour madness and some Nordic tastes, we found a common ground.

Started by brewing “Session Sahti-like Ale” base with rye and all the other traditional ingredients. From the North we brought seabuckthorn berry, which is an awesome antioxidant. Del Ducato threw in some fresh ginger, melissa, maqui berries and later added juniper berries.

The whole thing was first fermented with a traditional Finnish Sahti yeast strain we brought with us. After that it was given a secondary fermentation with Roeselare yeast (which is a blend of Belgian style ale strain, a sherry strain, two Brettanomyces strains, a Lactobacillus culture, and a Pediococcus culture) to take some edge off. Crazy enough?

In this beer we have all the antioxidants and other cool stuff to make a potion that makes a brewer live forever. Hard to categorize this beer, but if we had to, it would probably be Spontan Ale. Boom!

Posted in: From Sori